2. Ensure that the newly defined DHCP Scope is in the same IP range as that defined on the Wireless Dynamic interface

3. Under Bind Username enter the Distinguished name of the LDAP user that the WLC will use to authenticate to the LDAP / AD server. You can use an LDAP browsing tool such as Jxplorer to get the DN of an LDAP user.

4. If you are using AD, use sAMAccountName as a User Attribute, and Person as the User Object Type.

5. The user base DN servers as a filter to return a desired subset of users.

6. Assign the above LDAP user to a defined WLAN (in the below example WLANs > WLANs > Sysadmins): 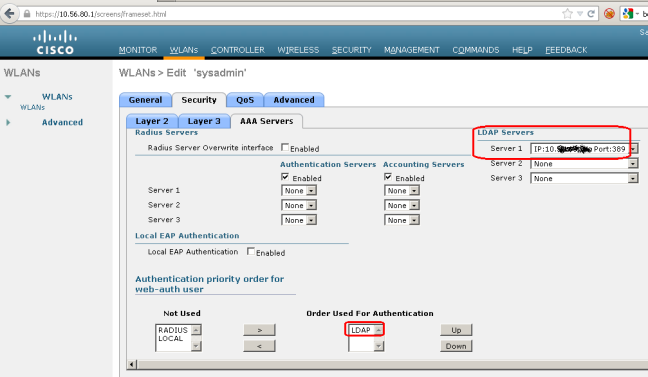 Underneath LDAP Servers, select the previously defined server, and under Order used for authentication make sure to select at least LDAP

We had issues importing a 3rd party ssl certificate to the WLC for use in the web auth portal. The management logs spat out an error message that it cannot PEM decode private key. After finding this helpful post:

I just needed to install OpenSSL 0.98 in windows rather than using my linux openssl client. Smells like a bug…