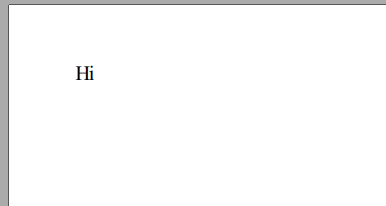 WKHTMLTOPDF is an extremely popular tool to convert existing html pages (or strings) to a PDF. This comes in handy for CyberSift’s Tutela product, where we are required to generate PDF reports programmatically. A significant aspect of these reports are graphs and charts to more easily visualize data. When using newer charting libraries, we ended up with blank pages instead of charts.

To build some context, assume we have the following GoLang file which:

Simple enough, and a PDF is generated, but when opened, you can see the “Hi!” in the first page, but nothing in the second page where our chart is supposed to be:

In troubleshooting this, it’s useful to “break it down”. The problem can be broken down into two stages:

Tackling the first problem is easy. Prevent the program from deleting the temporary echarts HTML file in line 63 by commenting out the “defer os.Remove(f.Name())” line. After running this program, you should be left with a bar-….html file, which can be opened in the browser:

So the echarts library isn’t the problem. Must be WKHTMLTOPDF. To remove even more cofounding variables, let’s return to basics and use wkhtmltopdf directly on the html page:

It seems to run properly, but the “troubleshooting.pdf” file shows the same issue… a blank page. Definitely a wkhtmltopdf problem then.

Hunting around for debug or logging flags, we come across a promising flag:

Running that now gives us a clue in the warning:

BUT it struck me that older browsers dont understand newer JS keywords like “let” and “const” (the benefits of getting older I guess…), instead only var was used. Let’s test that theory by turning any “let” occurrences in the HTML to “var”:

No errors this time, and the troubleshooting.pdf file is correctly showing the chart! So let’s modify our program and insert a simple search and replace:

Success! The final version of the program follows below. I hope this saves some hair pulling while offering some insight into how we tend to troubleshoot issues