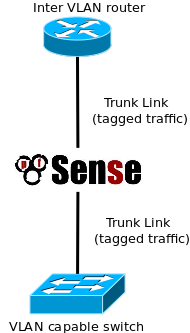 Scenario: We needed an in-line, transparent traffic shaping solution. The solution we chose was pfsense due to it’s easy to use UI and effective QoS. The PfSense had to be placed in bridge mode, on a link that was carrying tagged traffic. It is important that the PfSense did not touch the vlan tagging, it was only to rate-limit the traffic.

The first step was to bridge the two interfaces. We first created allow rules on the firewall to allow all traffic to pass through the pfsense since filtering was not necessary. We then proceeded to bridge the interface via Interfaces > (assign) > bridges and creating a bridge interface containing the two interface in question. No further configuration was needed. PfSense retained the VLAN tagging so the L2 802.1q vlan tags were preserved across the bridge

An IP address was configured on one of the interfaces for management. Two points about configuring an IP address on the Pfsense:

We next go on to defining queues for various traffic classes we needed. We decided not to use the wizard since that would introduce several feature we didnt need. The below is done via Firewall > Traffic Shaper.

The rules allow you to classify traffic as any other firewall rule does, so you can limit by subnet, IP, service, protocol, etc… simply define the rule, and under the advanced section make sure to select the correct queue (second fiel – the first field is used for ingress QoS which we didnt use)

The nice thing is that pfsense doesnt limit the maximum number of queues that you define – much better than some commercial solutions out there!!! 😉